Fi delivers intelligent progressions that make sense – rather than random beastings that leave you on the brink of injury.

On the back of a good performance at Ironman Copenhagen in 2014, Fi tailored my training plan to focus on my weaknesses – namely the run.

But she didn’t forget my strengths either, instead working on bullet-proofing my swim and my bike with added extra skills.

I used everything in a very tough Ironman Vichy – including the backflip move that allowed me to fly across the back of another swimmer to find clear water and cooling tips for the 32C marathon.

Despite the challenges I knocked 20 minutes off my last Ironman time – seventh in my age group and 27th woman.

For the previous 15 years I had been self coached and was training 15 to 20 hours a week and would often suffer illness and injury. I decided to find a coach and the first coach I worked with was egocentric and only interested in telling me how lucky I was to have him as a coach. The relationship rapidly deteriorated and following a recommendation I contacted Fiona.

With Fiona I really felt that her focus was on helping me achieve my goals and her own track record as a successful athlete gave me significant confidence. I also liked her holistic approach that encompassed training, nutrition, strength and conditioning, race psychology and lifestyle considerations, such as work and family commitments, as well.

As a self-confessed sports science geek I also liked the fact that Fiona had a sports science background and was happy to discuss the more esoteric technical aspects of sports science. Working with Fiona she immediately halved my hours but increased the effectiveness of the hours I did train. I knocked over twenty five minutes off my Olympic distance time which was enough to qualify for both the World and European champs in Canada and Switzerland respectively.

With one tick in the box we moved on to my Ironman dream and in my first attempt at qualification I secured my slot and have just returned from Kona having realised a dream I thought might take me a lifetime to achieve.

I am now taking a year off triathlon to focus on the bike but will return to triathlon in 2018 to initiate a two year campaign to podium at the British National Champs at olympic distance. I am confident that with Fiona this is a realistic and achievable goal.

On my 50th birthday I decided I would like to complete a full Ironman and at the age of 52 and 10 months I achieved this. I had taken part in several cycling endurance events for charity and the Alpe d’Huez short triathlon, however, this was another level and my biggest concern was the 3.9km swim. A chance meeting at Shepperton Lakes gave me a recommendation to attend Fiona Ford’s Swim Smooth squad whereby over the course of a few weeks and months Fiona transformed my swim stroke with a combination of triathlon group swim sessions (geared towards open water swimming) and a 1:1 video analysis. I was so impressed by Fiona that I asked if she would coach me over the three triathlon disciplines over a two year period with a view to competing in a full ironman.

Fiona assessed my capabilities in swim, bike and run and then prepared a weekly training programme to fit in with the time I had available whilst also having a full time job and a challenging lifestyle as I was a keen sailor. I would never have imagined that I would have enjoyed the training so much as I was very much a competitor and loved doing events. During the two years, Fiona built several other events into my programme allowing for the taper and recovery. Fiona’s programmes were always very interesting and challenging and she seemed to know exactly how to pitch them for me. The four weekly catch ups enabled me to discuss any issues or concerns I had; I found Fiona to be a very motivational coach and having competed at the highest level, very inspirational too.

In July of this year I finally achieved my dream and completed the Bolton UK Ironman in just under 15 hours, I would never have imagined completing, it let alone with two hours to spare. I cannot thank Fiona or praise her highly enough for her imaginative programmes, her advanced technical knowledge of the disciplines and events and her supportive and patient coaching style.

I wouldn’t hesitate to recommend Fiona as a performance coach.

It is actually possible to transform a ramshackle, pseudo athlete, mother-of-two-year-old twins into an Ironman Age Group top ten finisher in 12 weeks.

I know this because it’s what Fiona Ford managed to do when I confronted her with something that really should not have been achievable with three months to go.

What you get from her coaching is laser-sharp focus, belief in her athletes and a training plan that really doesn’t come from the “one size fits all” school of thinking.

My training plan fit brilliantly with the needs of my family, my demanding full-time job and, crucially, my abilities.

She put me on the startline of Ironman Copenhagen in great, well-rested shape to achieve a time I never dreamed of getting close to first time out of the box. 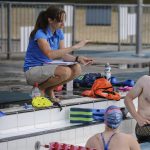 My services as a Swim Smooth coach can be found here.